Tallysman is pleased to introduce the TW2920 antenna for simultaneous reception of L-band correction signals and all of the upper band GNSS signals including GPS L1, GLONASS G1, Galileo E1, and BeiDou B1. The TW2920 1dB bandwidth covers 1525MHz to 1559MHz for the L band down-link and 1559MHz to 1610MHz for the upper band GNSS.
The LNA of the TW2920 provides 28dB of gain; a higher gain version with 35dB LNA gain is available as the TW2940. The TW2926 antenna is an unhoused OEM version of the TW2920 with 28dB of gain.

These antennas employ Tallysman’s Accutenna™ technology with proven ability to provide strong cross-polarization rejection for greatly improved multipath rejection, low axial ratio, and tight Phase Center Variation (PCV). These antennas are smaller, lighter, and less expensive than similarly capable antennas on the market, without compromising performance.
All of these antennas include a sharp pre-filter to protect against sub-harmonic signals such 700MHz LTE and strong near frequency signals such as WiFi.
The TW2920 and TW2940 have metal bases with wide temperature range plastic radomes, 57mm in diameter and 15mm in height, with a magnetic mount or adhesive mount along with four tapped screw holes. They are IP67 compliant and available with either a watertight SMA connector on the bulkhead or with a RG174 cable with your choice of connector.
The TW2926 OEM version of the antenna is 56 mm in diameter and has four (4) drilled plated holes for secure mounting within customers’ products. This antenna can be custom tuned to ensure optimal performance within your enclosure
These antennas are REACH and ROHS compliant. 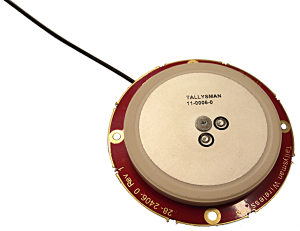 Made by Reni design studio